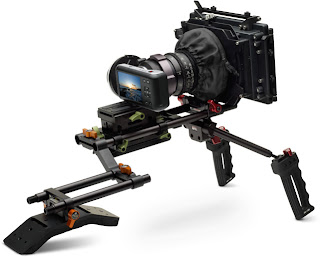 Just about every 6 months or less a new camera is announced with even more amazing features for even less money.  There have been a few cameras that have peaked my interest over the last year: Blackmagic Cinema Camera, Canon C100, Sony F5, and as of this week Blackmagic's Pocket and 4K Production Cameras.

But of all the cameras I've looked at not one of them is my perfect dream camera.  Each camera has strengths and weaknesses.

Ten years ago the Panasonic AG-DVX100 was the perfect camera for its time.  While the technology world has raced on and thereby making this camera obsolete it will always hold a special place in my heart.  It was the first professional quality camera I got my hands on.

The DVX had a lot going on for it.  A fantastic ergonomic design, multiple frame rate options including the coveted 24fps, a fast Leica lens, and a slue of professional video and cinematic features.  It had a good run of over 5 years and was an extremely popular camera.  No camera since has matched price and performance so perfectly.

Cameras these days have some incredible features but either cost too much or are missing key features, or both.

The Canon C100, for example, is overpriced by $2-3k dollars.  For what you're paying, you should at least be able to get higher progressive frame rates out of it.  And it has a less than desirable on board recording codec, AVCHD at 24Mbps.  On the plus side, this camera's large Super 35mm sensor performs miracles in low light and the camera has an overall great ergonomic design.

The Sony F5 has just about every feature I could want, but at $15k it is well out of my price range.  The form factor is fine if you have a couple camera assistants to help you put the camera together, but it is not the ideal run and gun camera.  Sony also introduced a new custom codec, the XAVC codec which I'm sure is great but ideally I want a camera to shoot straight to ProRes.

I'm more forgiving of the Blackmagic cameras.  Mostly because of their price points, all below $4k.  The highest end camera shoots raw or ProRes at 4k resolution using a global shutter.  A global shutter means no more jello-cam wobbling rolling shutter issues.  If you don't know what this artifact is pull out the camera on your smart phone and pan it quickly back and forth.

The other two Blackmagic cameras suffer from the rolling shutter artifact and have smaller sensors but can still hold their own in spite of this.  You get amazing dynamic range and raw or ProRes on board recording.  The low end Pocket camera is less than $1k and has full HD resolution.  And the original Cinema Camera (as well as the new Production Camera) come with a fully licensed copy of the de facto color grading software DaVinici Resolve.

So what are the Blackmagic cameras missing?  Three obvious features come to mind.

The next is a feature both the F5 and C100 have, built in neutral density filters.  Digital sensors are so sensitive to light that we need filters to expose correctly when we're in bright sunlight.  You can put filters in a matte box or buy variable ND filters that screw on the front of a lens, but this is just extra stuff I would rather not deal with.  Camera manufactures, just put these filters in the camera!

And the third feature goes the opposite direction, better low light sensitivity.  Blackmagic does okay at this, but their cameras have nothing on the C100 and F5.  The ability to peer into the black and still see an image is mind blowing.  In addition to the creative implications, it also means less lighting is required on the set.  Less lighting means less gear and people, which means less money spent on your production.

But all in all, considering that Sony's F5 and Canon's C100 cost 2 to 3 times more than the Blackmagic cameras, plus both of those cameras lack Blackmagic's raw and ProRes on board recording options, I think the Blackmagic line up wins.

Here's my current wish list for what would be my perfect Digital Cinema Camera:
- Costs less than $4k
- Super 35 size image sensor with a global shutter, high native sensitivity (2000 ISO?), a minimum of 12 stops of dynamic range, and around 10 megapixels of resolution.
- Handheld ergonomic design (look at the DVX for a start)
- Built in NDs
- No complaints about a fixed zoom lens if it's fast and sharp, but a lens mount that can be adapted to PL and EF lens mounts is a bonus
- At least 1080p ProRes in camera recording, with LOG curve option (4K ProRes and raw is a bonus)
- 1-60fps (wouldn't complain about even higher frame rates)
- Full manual control
- Professional Connections (SDI, HDMI, XLR, etc.)
- WiFi connection for monitoring, control, and metadata entry
- High Res LCD with touch screen controls, peaking, zebras, scopes, and 1:1 focusing

Something that meets all this criteria would blow my mind!

In addition to my dream camera I think a big brother $10k version with more features but still using the same accessories and has a similar picture quality is a plus.  That way you can rent the more expensive one when you need it while using the inexpensive one you own as a B camera.

My dream camera is probably not that far off, especially with companies like Blackmagic pushing the competition forward.

One final note: I love technology and obsess over gear.  But these are just tools to aid the storyteller.  I do the best I can with the best gear I have access to today while I get excited about what may be available to me tomorrow.