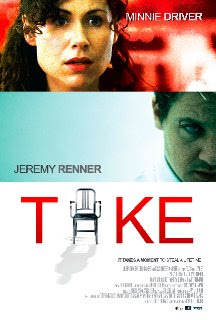 Today an independent feature film starring Minnie Driver called "Take" is being released in local Utah theaters for all to enjoy. I had the pleasure of going to a special advanced screening last Wednesday evening at the Gateway. It was emotionally heavy and very dramatic, perhaps to strong for me personally. However, it is undoubtly a powerful movie with great perfomances and story throughout. Charles Oliver (writer/director) and Chet Thomas (producer) were there as well for a Q&A session after the movie.

Now for those of you who don't know I have a bit of history with Chet Thomas. In early 2003 my commercial art teacher Tom Wood advised me to get involved with a program called Independent Student Media Films (www.ismfilms.com). A former student of his (who he said I reminded him of because we both always talked about making big movies someday), Darrin Fletcher, had teamed up with Hollywood producer Chet Thomas and started this nation-wide educational program. My friends Jim and Angie came with me to a presentation Chet and Fletch gave at a local high school. We stuck around afterwords to bug them and pick their brains for knoweldge.

A few months later while Jim, Angie, and I were down in Burbank to help on the shooting of "The Book of Mormon Movie" we stopped by Chet's office in North Hollywood and he gave us an hour of his time to ask him questions and learn about the industry. A couple months after that we particpated in ISM's summer workshop here in Utah. Teachers and students were assigned to work with different departments everyday and learn directly from Industry professionals during production of a short film shot on 35mm film.

I was out of high school and Jim was a senior during the 2003-2004 school year. Jim had special permission to go to West Jordan a couple times a week to be in the ISM film class at West Jordan because they didn't have it at Brighton High. We utilized West Jordan High School's equipment they purchased for the ISM film course to create a short film unlike any we had made before. It was called Catawampus and we finished it in June of 2004.

I served as a spanish-speaking missionary in the CA San Fernando Mission. Four 3 months I lived with english-speaking missionaries who served in Chet Thomas' ward in Burbank. I never really got to speak to Chet but the english Elders passed a DVD of Catawampus with my contact info onto Chet and said hi for me.

Skip forward a few years later and Chet Thomas is promoting "Take" here in Utah. The day after the advanced screening Chet and Charles were up at the University of Utah were they gave an amazing presentation on the making of this film. It mostly covered pre-production. Writing, financing and budgeting, storyboarding, and all sorts of really cool topics were discussed in detail. There were also a few amusing stories.

After the presentation I had the perfect opportunity to put in a plug for ISM Films to Brian Patrick (the head of our film program at the University of Utah) with Chet standing next to him. I started a mutually benifcial dialog between the two. And Chet thanked me for my efforts afterwords.

Yet again I had an amazing experience that helps to motivate me in my filmmaking endevours. I believe I made a good impresion on both Charles and Chet. I made sure to obtain all their contact info and they have mine. I'm sure that will benefit me greatly in the near future.