Ed Catmull Lecture at the University of Utah 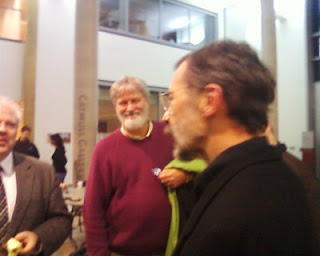 I just returned from meeting one of the most important people I could have ever met. If you read one of my early blog posts you will find one with me raving about a book called Droidmaker, that book is mostly about this person. His name is Ed Catmull and he gave a lecture at the University of Utah tonight. His lecture was particularly helpful to me because it was about good business management and what Pixar does to keep great movies rolling out.

Basically the lesson learned was that top to bottom, micromanaged business is bad. Teams need to be formed with people who work well with each other and they need to reach goals and solve problems together. In order to do that everybody needs to give their honest opinion no matter how much they respect and admire or fear those above them. As a result the company will grow, change, and evolve. Pixar is all about having a creative, fun, and hard working environment. If you want to read a full review of what was covered in his lecture go here: http://www.slccut.com/SLCCut-Meetings/walt-disney-and-pixar-animation-studios-in-utah.html

After the lecture there was a reception in a lobby area of the building which is actually named after Catmull. There we got to introduce ourselves to the man himself. I told him that I was a film student who recently started up my own video production company and that I aspire for my business to be like Pixar someday. I also told him that Pixar is the only movie company ever to not put out a bad movie and that's really something when you stop and think about it. He told me they would keep trying to make great movies. I didn't realize how much I was shaking due to intimidation until I took a pic of him with my cell phone, so I apologize that it is a blurry and low res. Ed Catmull is on the right, in the center is the head of the film studies department, Kevin Hanson. You can see Catmull's name on the pillar behind Kevin.
Ed Catmull Pixar university of utah